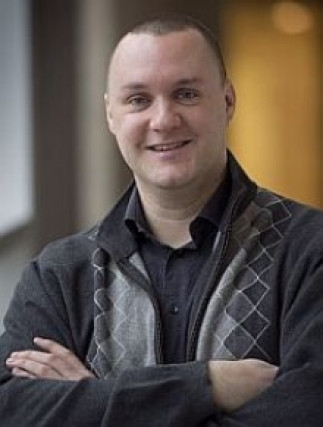 Hypervalent iodine (HVI) reagents hold tremendous potential in the development of new synthetic methods, whether by devising fundamentally new reactions, or by diverting the course of known processes. Over the past several years, we have developed new fluorinated motifs from diazos and hydrazones,[1] which exploit a HVI reagent’s oxidative  and/or ligand transfer potential. We have been equally interested in using HVI compounds as substrates and catalysts to develop new C-C bond-forming reactions. This led to new cyclopropane and dihydrofuran syntheses,[2] which has now evolved to exploit blue LEDs to initiate such reactions from iodonium ylides. This talk will highlight our most recent work on fluorinative rearrangement reactions (1, 2), on interrupted Wolff-Kishner reductions that incorporate the -CF3 group (3), and on the synthesis of carbocycles and/or heterocycles (4, 5) using HVI catalysis or LED irradiation.

Graham Murphy received his Ph.D. from the University of Alberta, where he worked in the laboratory of Dr. F.G. West on using oxonium ylides in the synthesis of fused, medium-sized rings. He held a JSPS postdoctoral fellowship at Tohoku University with Dr. Masahiro Hirama, an NSERC postdoctoral fellowship at Colorado State University with Dr. J.L. Wood, and he was a postdoctoral fellow supported by the Biorefining Conversions Network at the University of Alberta. He began his independent career in 2011 at the University of Waterloo, Canada, and was promoted to Associate Professor with Tenure in July 2017. He is a recipient of numerous awards, including the Thieme Chemistry Journal Award and the Province of Ontario Early Researcher Award. His independent research program concerns developing novel reactions mediated by hypervalent iodine reagents.